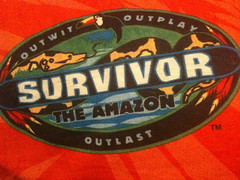 Whether you love him or hate him, you cannot deny the impact Jonny Fairplay has had on the Survivor television series. Jonny Fairplay finished third in the 2003 Survivor: Pearl Islands season (yes, he is the one who claimed his grandmother died when she really hadn’t). He also appeared in the special Survivor: Fans Vs. Favorites in 2008. He has definitely been a character to watch. Well, we here in Vancouver, WA now have the chance to hobnob with Jonny during this Sundays finale of Survivor: Nicaragua.

Starting at 8pm, Sunday December 19th Jonny Fairplay will be watching the finale downtown Vancouver at The Atrium Lounge. I just wrote about The Atrium this last Monday for my Day 300. I believe their screen is 20 feet and will be perfect for a viewing party. The event is FREE which is a wonderful price. It is also completely open to the public so head down to visit, watch the show, enjoy some great food and drinks and hang with fellow Survivor fans.

The Atrium Lounge is located at 606 Broadway Street, Vancouver, WA 98660. If you are brave enough you can connect with Jonny Fairplay over on Facebook. ;)