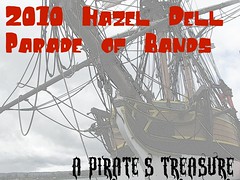 It’s that time of year once again. The annual Hazel Dell Parade of Bands is here. This Saturday will be the 46th year of this local event. This years sponsors are the Hazel Dell/Salmon Creek Business Association and Bomber Brothers Fireworks. The theme of this years parade is “A Pirate’s Treasure“.

In addition to the normal parade they are introducing a pre-event run/walk that is sponsored by Max Muscle Sports Nutrition of Vancouver. It is a 4k run/walk (2.5 miles) that follows the path of the parade. This pre-event is a benefit for Bridge the Gap of Clark County, WA. 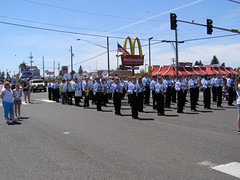 As a child growing up in Vancouver we always would go and watch this parade. As a teenager at Wy’East I was fortunate enough to be in the marching band so I got to be a part of this nearly half century Vancouver tradition. Some times it would be scorching hot and sometimes we’d be blessed with that beautiful liquid sunshine of the Pacific Northwest. :)

The parade route begins at Target on Hazel Dell Avenue. It proceeds south along Hazel Dell Avenue to 63rd Street. It heads east along 63rd and then turns north along Highway 99 to Fred Meyer. The first groups head out at 10:30AM.

This is not just a parade of bands, you’ll see all sorts of different local groups represented on floats and walking. I’d suggest you get out and enjoy the day this Saturday!

Special thanks to my friends at Clark County Live for the band parade pic. Have you checked them out? You should.