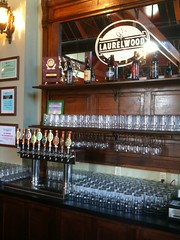 My friend and I started with an order of six wings (Monday’s are $.50 wing days) with the special of the day sauce. It was a sweet sauce that was very good. The wings were pretty good. 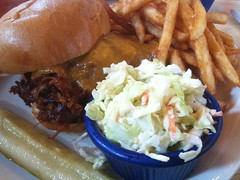 For my meal I had the Shredded BBQ Pork sandwich with cole slaw and a huge order of beer battered fries. My entire meal was great. I enjoyed the sandwich and the fries were awesome! Great flavor and just the right amount of crunch. My friend had the Santa Fe burger and fries which he also loved. I snuck a bite of the guacamole off his burger and it was very good. He also had the Space Stout and he loved it. Our entire lunch cost less than $30 which included the wings and his beer. Not the cheapest in town but certainly on par for a similar meal experience.

Laurelwood is located on the east end of town at 1401 SE Rasmussen Blvd, Battle Ground, WA 98604 and can be reached at 360-723-0937. You can also find them on Facebook here. So, if you find yourself looking for a cool brew pub (that is also kid friendly) why not head out to Battle Ground and check this place out. It’s worth the drive.