This weekend launches the next show put on by our local Christian Youth Theater troupe. 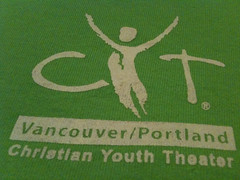 CYT has been in Vancouver since 2002 and taught thousands of kids. They have performed tons of shows and summer workshops. My daughter has been involved in these summer workshops for at least four years and loved every one of them. We have many family friends that have been very active in this wonderful theater organization and it is like a huge family for them.

Starting this Friday night is Into The Woods which is an interesting twisting, turning series of fairy tales intertwined together.

Into the Woods joins a number of well-known fairy tales into one story. Characters such as Little Red Riding Hood and her Granny, Jack and the Beanstalk, and Cinderella all live in the same kingdom and each have their own desperate “wishes”. In the first act, each of these characters must go into the woods to get what they want (to lift the spell, to go to the festival, to visit Granny, etc). They, of course, cross paths with each other and most decide to cheat, steal and do whatever is necessary to get what they want from those they meet. They live happily ever after at the end of the first act, but their kingdom is visited by a Giant in the second act forcing them to accept the consequences of their previous actions. After a long blame game, the characters learn that only by coming together and leaving selfish desires behind, can they save themselves from destruction. Into the Woods deals with many deep issues including selfishness, good versus evil, and the idea of how children grow through listening and learning.

Into The Woods runs Friday, Saturday & Sunday May 21st, 22nd, 23rd and 28th, 29th, 30th. The show is playing at Fort Vancouver High School and you can get tickets online here.

At the end of this month CYT will begin their next show of Godspell. It will be playing May 28th, 29th, 30th and June 4th, 5th, 6th. This production will be happening at the Washburn Performing Arts Center. It is located at 1201 39th St, Washougal, WA 98671. You can get tickets to Godspell online here.

Please get out and support our local arts. It is so important.