Tonight I got to spend a little time hanging out with the cast and crew of The Magenta Theater in downtown Vancouver. What an enjoyable time I had with this great group of volunteers who love the theater. 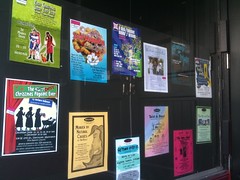 The Magenta Theater is a 501c3 non-profit theater company that has been bringing plays to our community since 2004. They established themselves in their permanent location at 606 Main Street last year. They have done a wonderful job of creating a great theater space for our community.

Tomorrow night (Friday the 5th) you have a great opportunity to see them in action. As part of First Friday ArtWalk they will be bringing us a series of Monty Python sketches (safe for all ages) as A Tribute to British Humour. This is a FREE event (but as they say on their site: donations gleefully accepted). The first set of sketches will begin at 6PM and they will continually run a new set every 20ish minutes. I was able to see a little sneak peek tonight and they were funny. Make a point to head down and catch one of the performances.

Magenta Theater can be found on Facebook as well. Please friend them up there and also by getting out and going to support them as they bring us great local community theater.

They have a full season of theater on the calendar with Pride and Prejudice as their next production. It will run from April 16th through May 1st. I know I’ll be there to enjoy it and support this local theater group. I hope you’ll do the same.